It was a big day for Troon Portland Curling Club at the 2021 Hart Trophy on 2nd November, with a TPCC team taking both first and second place in the competition. A team of (skip) Mara Lindsay, Kirsty Letton, Alison Young and Freda Miller took first place, and were the only undefeated team of the day, having won all three of their games. They were awarded the Hart Trophy. 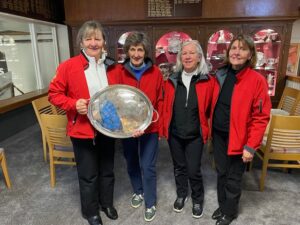 The Winners with the Hart Trophy

The second place team was skipped by Aileen McCorkell, along with Lisa Mason, Robina Gilbertson and Fiona Bain. Aileen’s team was awarded the Robertson Salver for coming in as the second highest team. As luck would have it, the only game Aileen’s team lost was to Mara’s winning team in an exciting Troon Portland head-to-head match!

Eight teams competed in the annual single-day Ladies’ competition, including a team that travelled up from Stranraer and took home the third place award. It was an excellently played competition, with lots of very close games and  great shots by all of the teams. 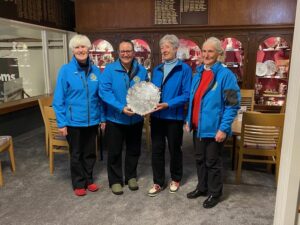 The Runners’-Up and the Robertson Salver

The competition was once again sponsored by Hope Homes of Scotland, who provided lovely prizes for the winning teams.  Special thanks to Bert McKay and Robert Boyd for doing the scoring, and thanks to everyone who organized and competed in the event.