Troon is a small seaside town on the west coast of Scotland some 30 miles south of Glasgow. 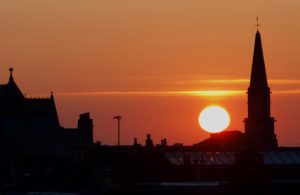 The fourth Earl of Portland is credited with transforming Troon from a resort of lawless smugglers in the early 1800’s into a thriving seaport town. The majority of the men who formed Troon Ice Club (the original name) had probably taken part in this development.
The Club was formed on 17th November, 1830 when 46 members each subscribed one shilling and Mr Wm. Aiton was appointed Treasurer.
The Royal Club was founded in 1838. The rules of play were then standardised.
The Club’s annual subscription was sixpence but the bulk of the funds came from fines imposed on members for non-attendance at meetings and matches. The main expenses then were for cartage of stones to neighbouring village matches, the maintenance of the pond, the provision of whisky and gifts of food to the poor. 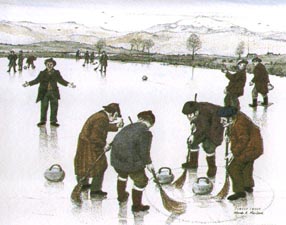 The Club’s ponds were first at Burnfoot (on the North Shore), then on South Beach near Lochend Road and at the Barassie end of the Darley golf course. The last pond was bought from Welbeck Estates in 1845 at a cost of £6-10 shillings paid by a levy on each member of 3 shillings and sixpence. This was known as the Reed or Red Loch and latterly as Lochgreen, in a field inland from the present Lochgreen Hotel.
In these early times Mr. Hector Cowan and Mr. A. B. Cowan each gave over 50 years service to the Club. The first lady member, Lady Glenarthur, was invited to join in 1899. She was a great benefactor and thoroughly approved and supported the Club’s tradition of giving to the poorer off.
The first record of the Club taking indoor ice was in 1941 at Ayr Ice Rink. The Club subsequently sold its Lochgreen pond and clubhouse back to Welbeck Estates in 1947 for £30, (despite the pond field then being drained for agricultural use it is still a favourite haunt of curlews).
The first Club trophy was a silver medal presented by Mr. Robert Smith played for between sides representing Templehill and Portland Street with a levy on players in the interests of the poor. In 1929 half a stone (3 kilos) of meal and half a pound of tea was distributed to each of 160 poor persons.
The Club has won the Eglinton Jug three times and the Gairdner Silver Curling Stone often. This is played for between the local parishes and is a special feature of each season when lose or win “to hurl the channel stane wi’ skill is the joy of the true curler”.
The Club’s recent Curlers’ Courts were held in the South Beach Hotel on 8th February, 1963 chaired by Mr. Stewart Young – “A’ here – Aye, a’ here and fit”, and at Ayr Ice Rink on 31st January, 1981 chaired by Mr. James Watson.
In 1980 the Club celebrated its 150th Anniversary and sat 135 members down to dinner, Mr. James Watson presided, Mr. Charles Carlow was Hon. Sec. and Treasurer. Many new clubs formed themselves in the 1970s and 1980’s drawing some members away from the bigger clubs such as Portland.
In 2005 the club held its 175th Anniversary. The event was celebrated by an number of events. A bonspiel was held at Ayr Ice Rink attended by Provost Gordon Mackenzie of South Ayrshire Council who presented the club with a Quaich. This was followed later in the year by a dinner at the Ice Rink to which RCCC President Gifford Rickard was invited. The last event was a curling weekend at Pitlochry at the beginning of November which had been the closest date available to the actual formation date.
Troon Portland Curling Club presently runs four leagues, 9.30 am on Tuesdays, and the rest at 5.15 pm during the week, pairs and points competitions. It also has its AGM and Dinner at the end March/early April. In recent years there has been a summer event (Golf outing, Archery day or a visit to a place of interest). The Club enters rinks in many competitions, including the Province competitions, the Ayr Ice Rink Day League, the Eglinton Jug, the Ross Low League, the Gairdner Trophy, the Waldie Griffith and our own invitation Letton Bonspiel played for the Letton Stone (and Spoon) presented by Kirsty and Jimmy Letton to mark Kirsty’s rink winning the World Senior Ladies Championship at Braehead in 2000.
The Club remains one of the largest clubs in Ayrshire although new members are always welcome. Any curler or aspiring curler wishing more information toward becoming a member of our Club is invited to contact the Club through the Hon. Secretary, Lisa Mason, by emailing troonportlandcurling@gmail.com.