A team of four intrepid club members (the Masons and McIntyres) finished in 10th place in the 55th International Summer Bonspiel in Cortina D’Ampezzo, Italy.

Initially there were three sections of 10 with every rink playing three matches before all three sections were merged to sort out the order 1 – 30. At this stage, the team was second in their section and fourth overall, however a young local hotshot rink who were the eventual competition winners knocked them down to tenth place. After losing this match, the team then played against the Italian wheelchair rink and their coach. This match was very close and came down to the last tricky shot which unfortunately they narrowly missed. The team remained the highest up Scottish rink and the result is very creditable considering the standard of the rinks playing. 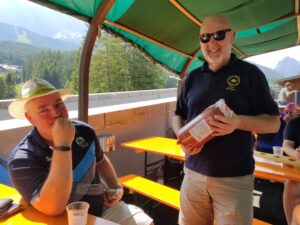 In true curling tradition there was much socialising with David being presented with 3.158kg of mortadella sausage by the Italian skip – definitely no better recipient!

Perhaps some other club members would consider entering a rink next season to increase the number of Scottish rink participating? The level of competition varies from club-level teams through to rinks with current internationalists. It is a very sociable event with lots of off-ice activities in an absolutely beautiful setting. 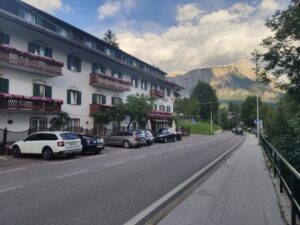 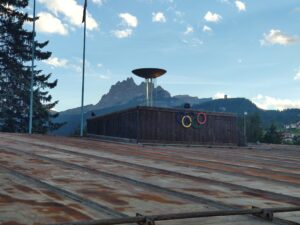 Scottish Women's tour to the USA