Troon Portland Curling Club hosted its annual invitational Letton Bonspiel on Monday, 21 November, welcoming 12 teams onto the ice. Curlers of all abilities joined in the fun, some having played only a few games before taking to the ice for the bonspiel.

The winners of the Letton Stone 2017

Ewan Marr welcomed the curlers at 6:00 and the 2-end games began shortly thereafter. Following the competition, the curlers enjoyed sandwiches and drinks, and the winners of the bonspiel, and the wooden spoon, were announced.

Taking home the wooden spoon was Ayr Curling Club’s own President, David McIntyre, who one can only assume was so pleased to see so many new curlers taking to the ice, that he was only a little bothered to have come in last in the competition. 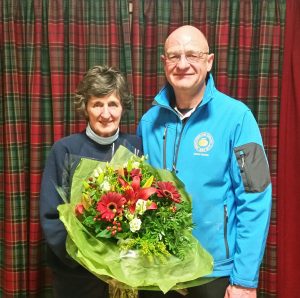 Finally, to wrap up the evening, TPCC President Ewan Marr presented Kirsty Letton with a beautiful bouquet of flowers in recognition of Kirsty’s many years of volunteering and promoting the sport of curling, and to continue the celebration of Kirsty’s winning the Lifetime Achievement in Volunteering award from Sportscotland. (See separate article here.)

As most club members will be aware, Kirsty, along with her husband Jimmy, donated the trophy for the competition in 2001 to mark Kirsty’s rink winning the World Senior Ladies Championship at Braehead in 2000.

Special thanks to Match Secretary David Kerr for helping the bonspiel run smoothly, and to all the curlers who came out for this great event. See you next year!